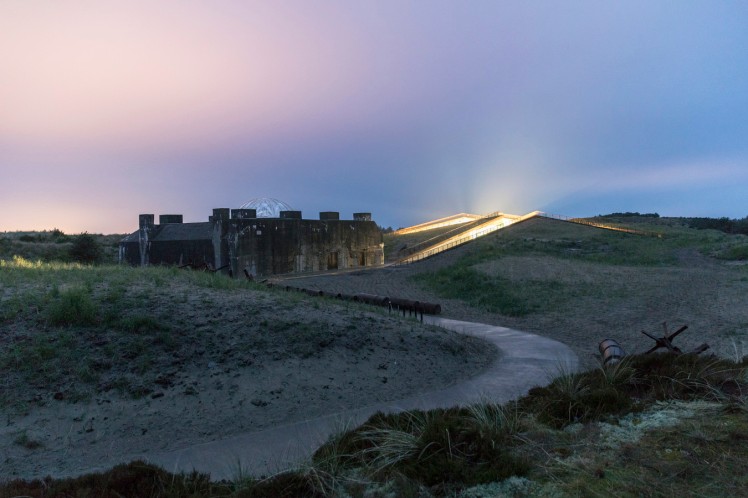 A 2.800m2 “invisible museum” to be created at a historic German WWII bunker in Denmark, by BIG architects

Commissioned by Museum Center Blåvand the new experimental cultural complex will be embedded into the dune landscape and integrate a bunker museum, an amber museum, a “histolarium” and a special exhibitions gallery within a single structure. 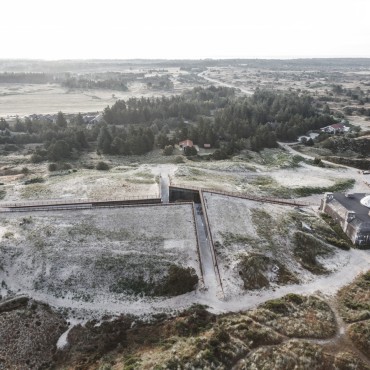 Upon arrival, visitors will first see the bunker until they approach through the heath-lined pathways and find the walls cut into the dunes from all sides and descend to meet in a central clearing. The courtyard allows access into the four underground gallery spaces that have an abundance of daylight even though they are literally carved into the sand. 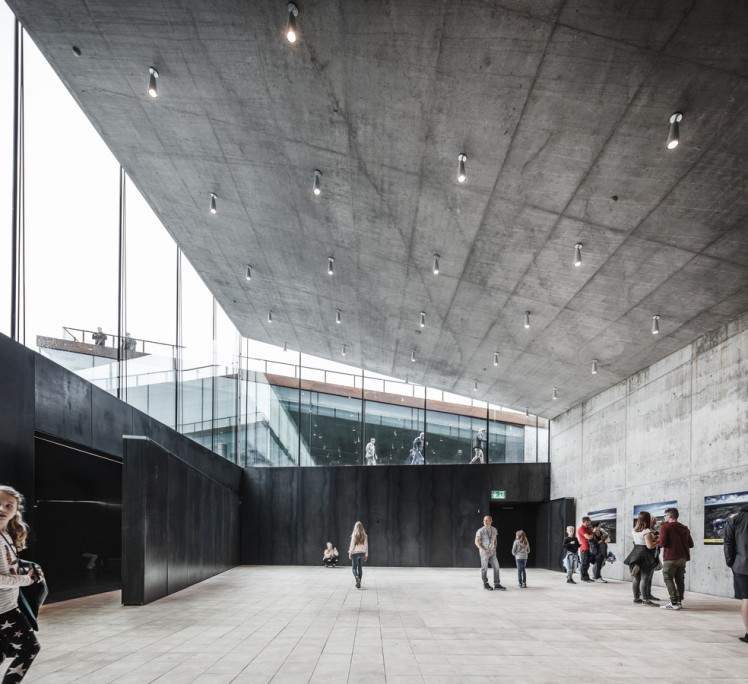 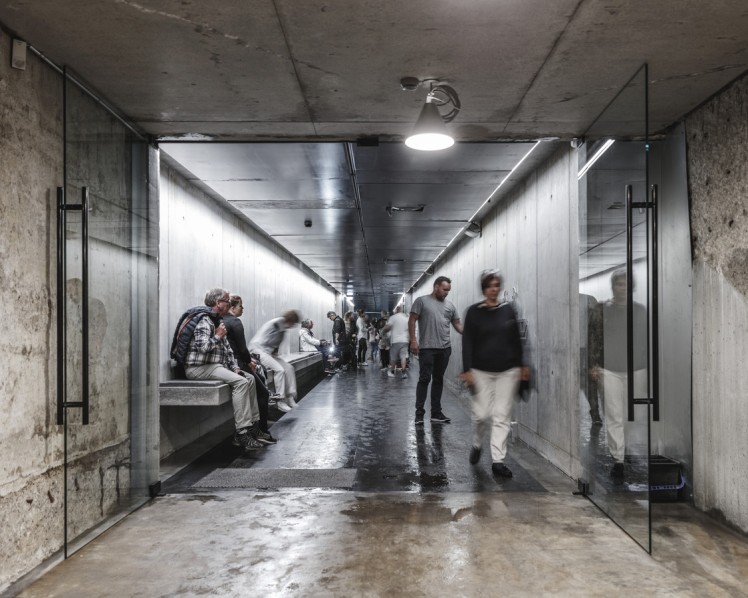 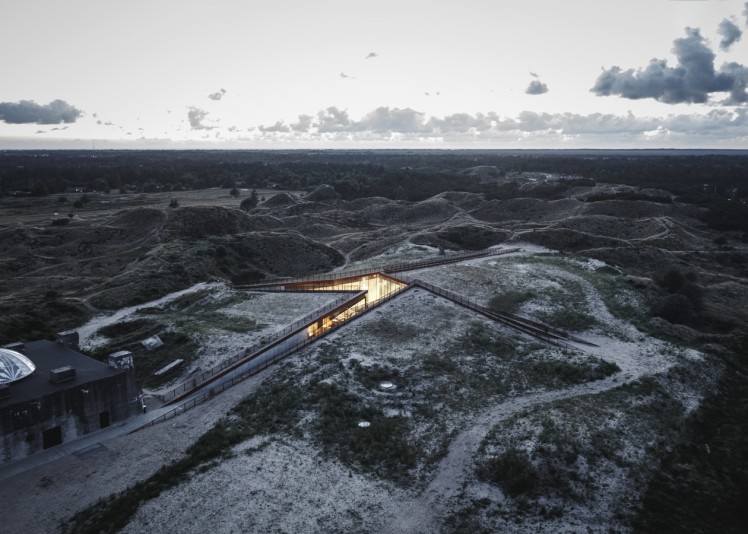 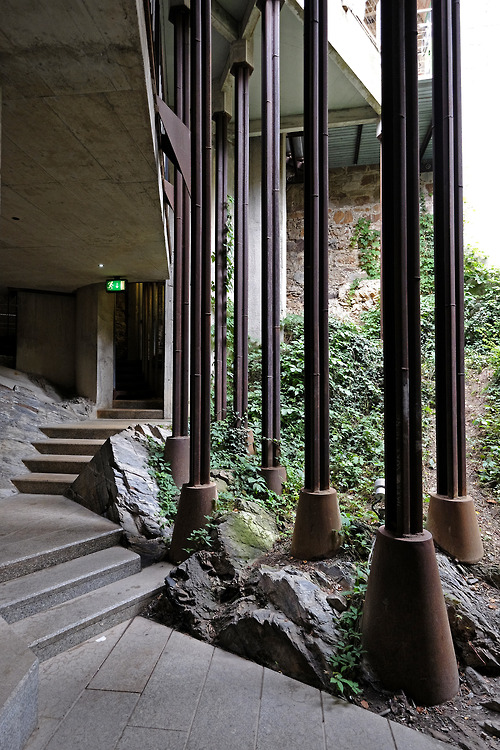 The Ljubljana Castle, Slovenia via scavengedluxury 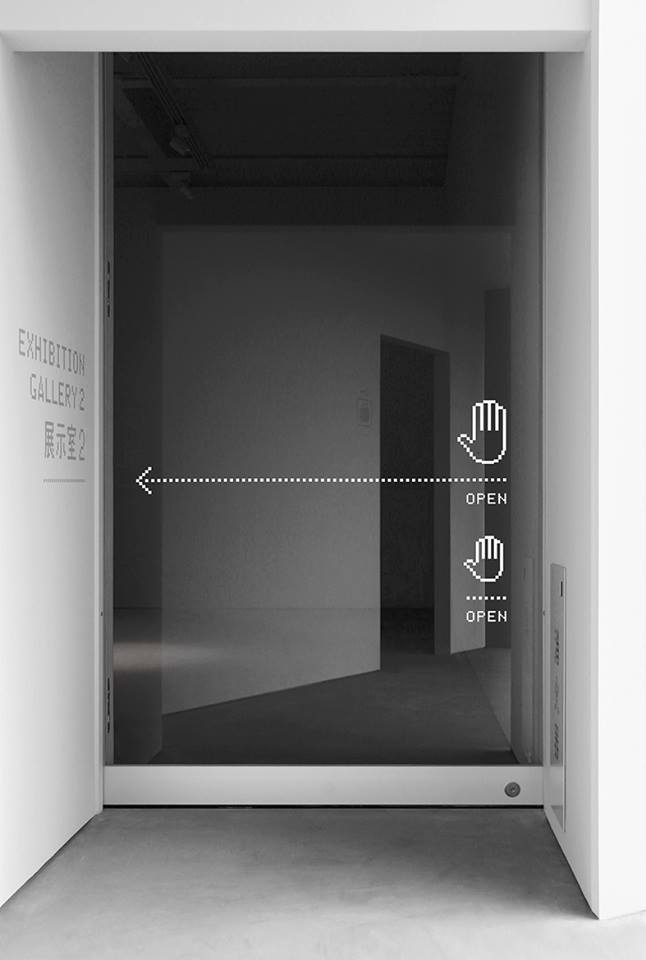 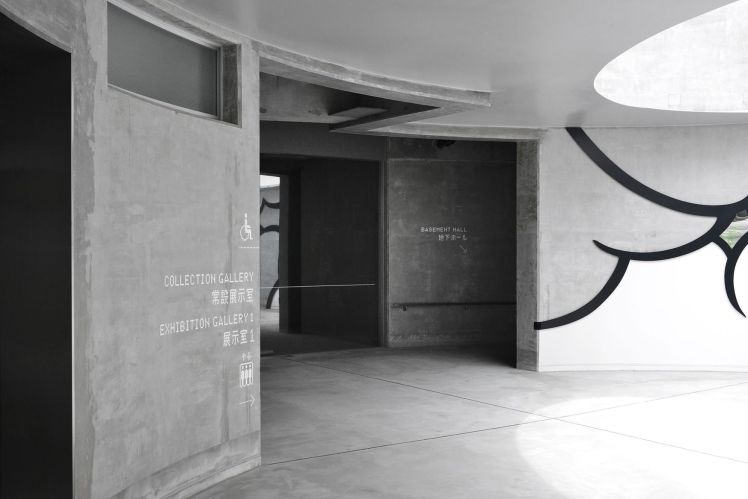 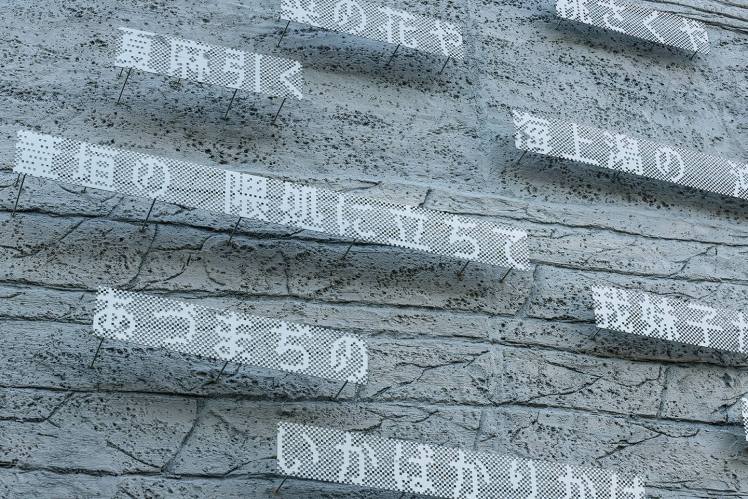 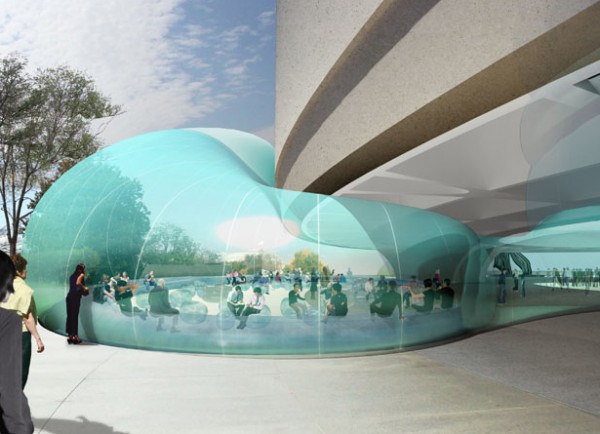 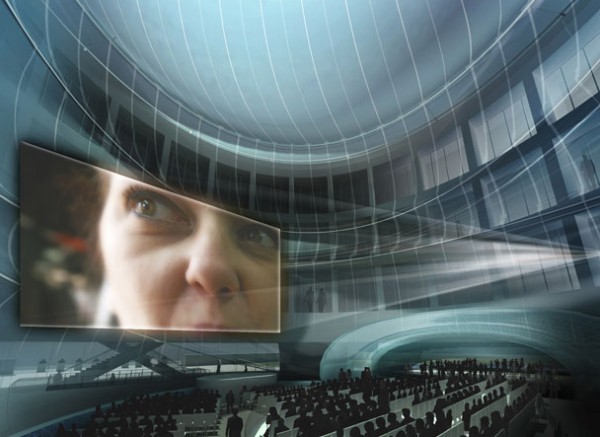 Imagine that you are visiting a pretty and quite traditional city, so overloaded with medieval cuteness that it is almost getting boring. And suddenly across one gate, in the center of all the tradition, you get a glimpse of an absolute architectural beauty: a brutalist building sandwiching a huge skeleton!

You approach carefuly and realise that the skeleton in real and it belongs to a giant (20m long) Finback whale!

Around it the beauty is unsurpassable: brutal architecture, concrete and glass and wood and stone delightfully combined, afternoon light flooding the space, and what’s best: more whales, including an orca, a pygmy whale and a narwhal waving to you while floating in the air! Boy oh boy, that’s a building! 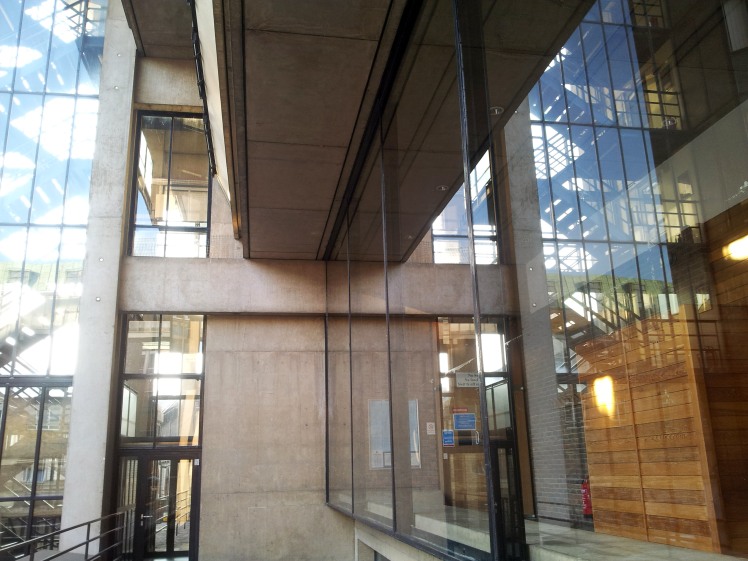 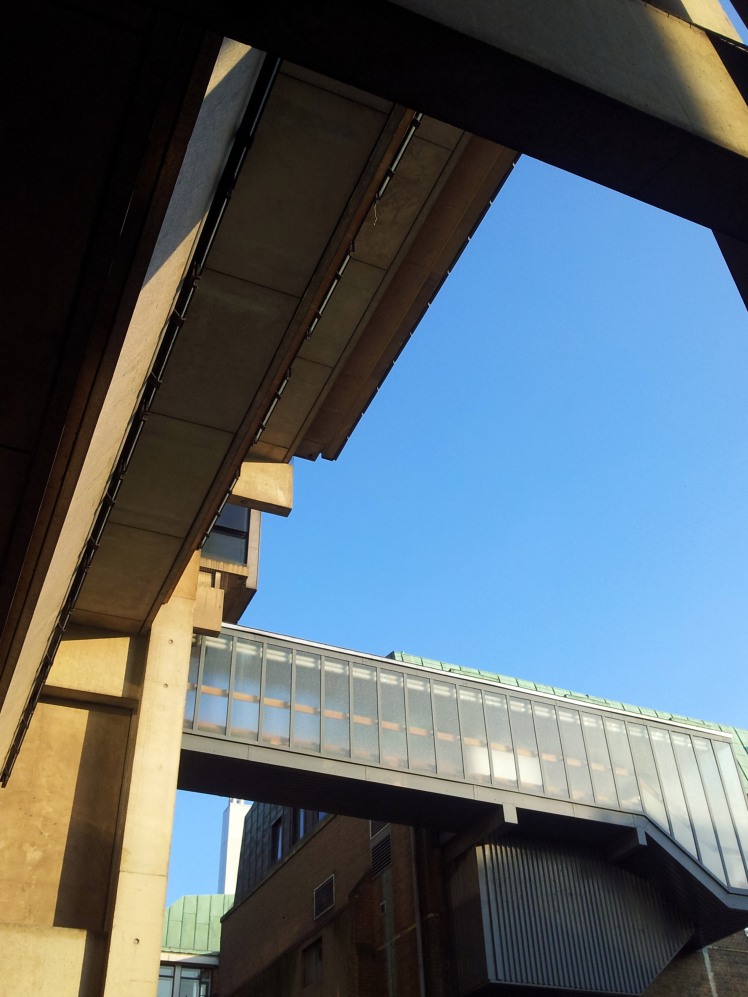 The Cambridge University Museum of Zoology (built  by Arup Associates in 1966-74)  is unfortunately closed for refurbishment until 2016. But the architecture and the whales will be there to keep you in good company.

Read more about the inovative constuction incorporated in the building here. Pictures by WWT (using a mobile phone camera, therefore the poor quality.)

A critical proposal on the Acropolis Museum in Athens competitions, completed in 1991 by Greek architect and professor Christos Papoulias (pdf link).

The architect suggests a museum entirely below the ground surface, build in a now invisible 17m high gap between two walls of the rocks’ phases, the Mycenaean and the Classical when the Acropolis’ rock was significantly expanded to it’s current retaining wall.

Uncovered by early 20th century excavations between the two walls, this gap today is visible only through a series of shafts left by the archaeologists (scroll for photos). These shafts and the now buried gap between the two retaining walls of the acropolis became the site for Christos Papoulias’ Erichthonean Museum of Acropolis proposal.

The museum would inhabit the south and south east part of the Acropolis plateau and could be visible only through it’s entrance. One of the existing caves would offer an exit down to the south side of the acropolis hill, leading the visitor to the fascinating but mostly overlooked theater of Dionysus and other important archaeological sites like the Odeion of Perikles, the choregic monuments, the Asklepieion, the stoa of Eumenes and the Odeion of Herodes Atticus. 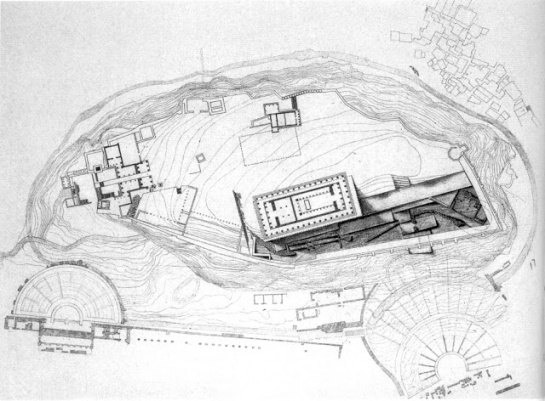 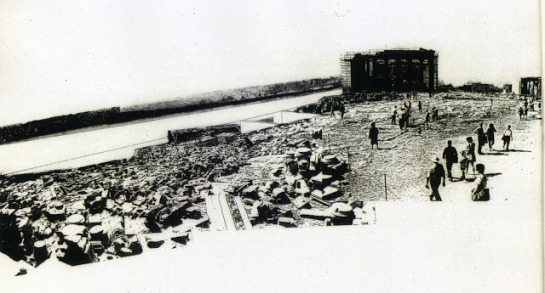 The walls of Erichthonean museum would be the originally visible base 17m high base of the Parthenon and the floor a series of carefully placed platforms, would mimic the roughly poured concrete that the archaeologists have long used to make the slippery rock accesible to visitors. 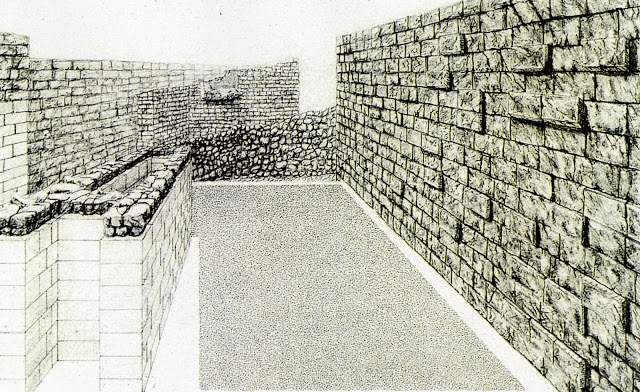 The original drawings from The Erichthonean Museum belong now to the collection of the Pompidou Center in Paris.

Christos Papoulias on his project: I called this project the Erichthonean Museum of Acropolis as a way of separating myself from what I considered mistaken museological ideas in the official competition program from the new museum. I worked with a new museological idea which took into consideration the city, the archaeological site and the topological characteristics.

photos of the shafts from the early 20th century excavations and the 17m high base of the Parthenon. 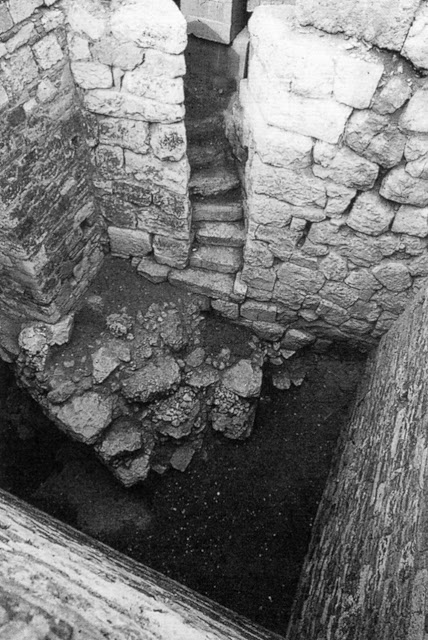 A proposal to turn the abandoned Battersea Power Station in South West London into a museum and amusement park, from the French Atelier Zündel Cristea (AZN), winners of the ArchTriumph competition Museum of Architecture, 2013. 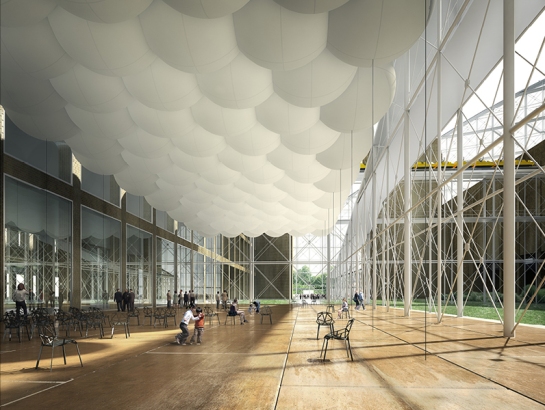 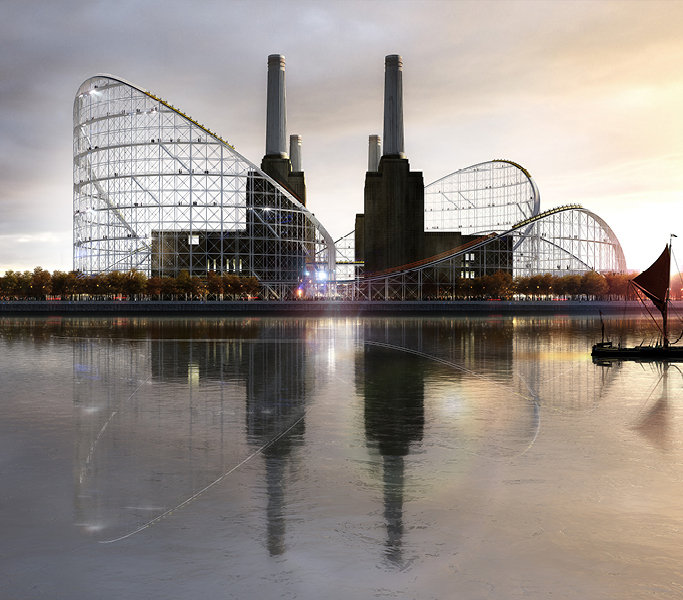 The 80-year old decommissioned building is located on the south banks of the river Thames surrounded by a mix of residential, industrial, office typologies and a nearby train station and park.
Built between 1930 and 1955, the victorian style design is an excellent example of original art deco interiors, constructed with steel frames and brick cladding and four concrete smoke stacks towering 103 meters above the ground; the coal-based electrical energy producing factory will be converted
into a venue for the exhibition of architecture from the middle ages to the contemporary age.

AZN on project’s concept : Our created pathway links together a number of spaces for discovery: the square in front of the museum, clearings, footpaths outside and above and inside, footpaths traversing courtyards and exhibition rooms. The angles and perspectives created by the rail’s pathway, through the movement within and outside of the structure, place visitors in a position where they can perceive simultaneously the container and its contents, the work and nature.

via the fox is black + designboom

A 13th century military defense tower in Spain -part of a larger fortress that has long since been destroyed, originally built by the Arab kingdom of Nazari during their rule in Spain- restored by Castillo Miras Arquitectos.

New additions to the old structure, a circular staircase -for the original entry is four meters off the ground-  and an information kiosk, both made as removable objects from cor-ten steel and placed directly onto the ground without foundations. 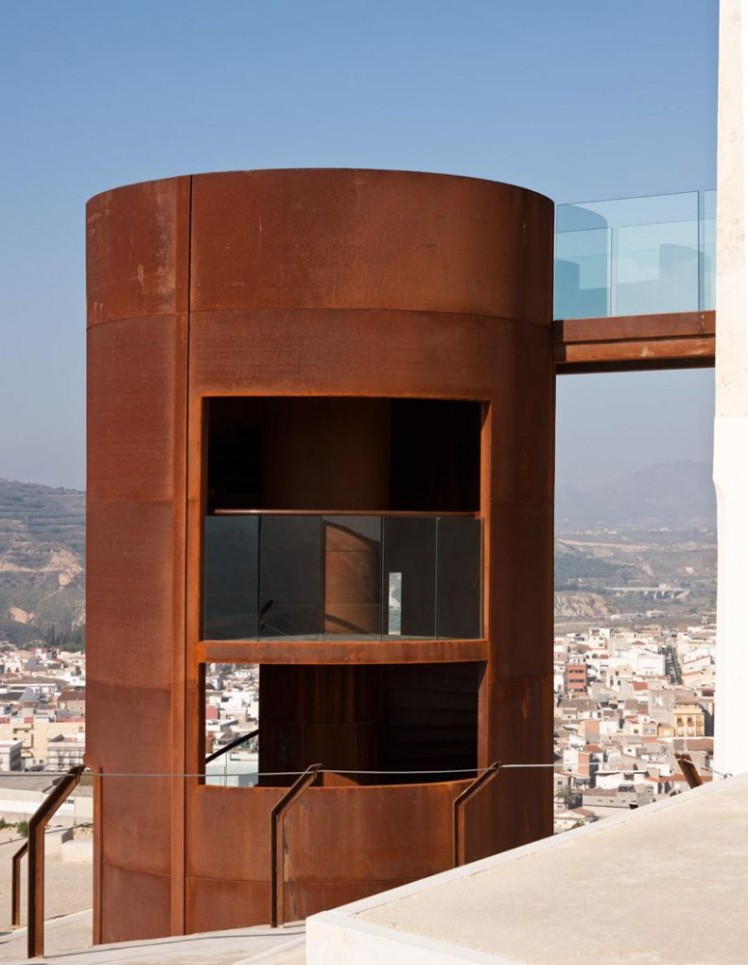 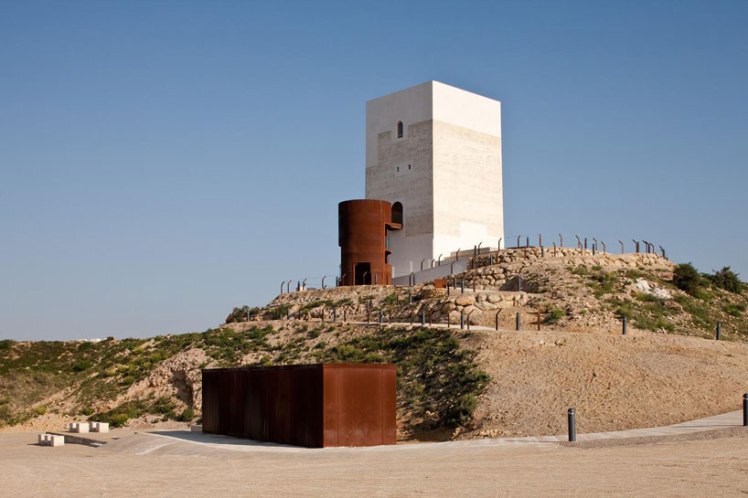 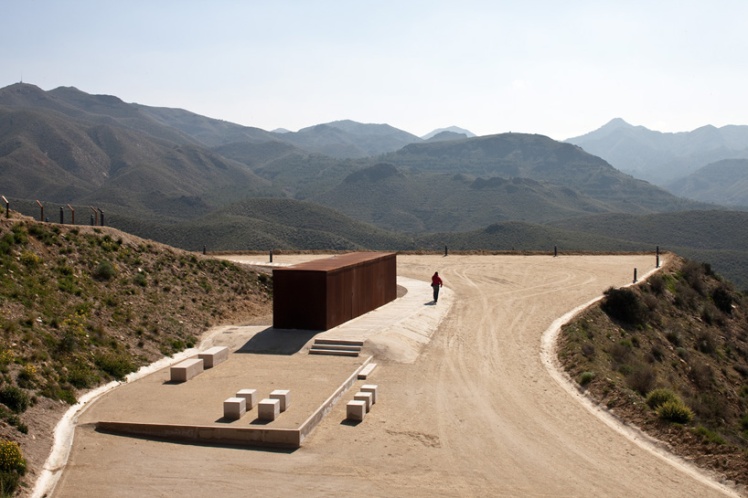