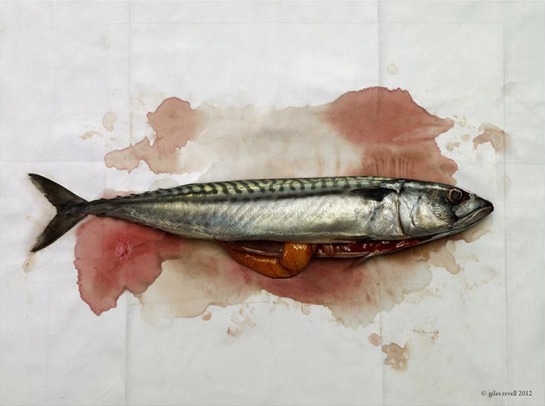 Photos for the summer issue of Port Magazine, maniputated by artist Giles Revell.

Mackerel: A ritzy looking fish with its metallic green-blue sheen scattered with a mass of black scribbles or bars on its back, pale green and purple flanks that sparkle with a myriad of hues. It’s designed for speed, is a highly effective hunter and can live for up to 20 years if it avoids nets and lines. It’s a fish that repays being eaten very fresh before its rich oil content starts to spoil. The aroma of the fish is reminiscent of fine green seaweed and its predominately pink flesh is succulent with discreet flakes that are almost chicken-like in texture.

John Dory: This extraordinary looking fish, with its quiff-like spiny dorsal fin and miserable face, has the rather grand Latin name Zeus Faber, as it was sacred to the god Zeus. It also carries the Christian name St Peter’s fish, the gold ringed dark spots on either side of its body are supposedly the fingerprints of St Peter, the apostle who pulled the fish out of the Sea of Galilee and plucked a gold coin from his mouth to pay his overdue taxes. The John Dory is a sophisticated predator, creeping up behind its prey then using its extending mouth to hoover up cuttlefish, small-fin fish and squid. To eat, John Dory could be described as elegant and is considered by many to be the best tasting fish in the sea.

Salmon: Atlantic salmon is one of the most popular eating species, probably because it farms so well. These fish are extraordinary as they are able to return to the river where they were born with pinpoint accuracy years after they went to sea, and it’s believed that a number of navigation aids, including the stars, differences in the Earths magnetic fields and ocean currents, guide them. Once they get close off the coast, salmon literally smell their way home, guided by a chemical memory of what their river smelled and tasted like. There is no mistaking its rich savoury flavour with its high and satisfying oil content.

Haddock is a close relative of cod, they have a bluish-brown back, silvery flanks, a black curved lateral line and a sensitive chin barbell used for feeling around for food in the dark ocean depths. They enjoy the cool waters of the North Oceans only coming inshore in summer to feed before going back offshore to breed. To eat, haddock has an ozone-like aroma that encapsulates the salt water from which it is fished; the texture is very lean, spearmint white and soft and it is best cooked with its skin on to enjoy its delicate flavour.

Herring :The “silver darling” herring has a rich history in the world of fishing. So important are they that from Britain to Scandinavia, there have been an enormous number of cures created to preserve them. From their head to the deeply forked tail they are predominately silver with a blue-green back, allowing them to melt away into the watery environment when viewed from above. Herrings are rich in oil content and are perfect for smoking after a spring and summer of feeding, which makes them lusciously plump. These wonderful oils add to the saltiness of their flavour and the skin adds a light seawater character and the flesh, a slight white peppery spiciness.

via the fox is black